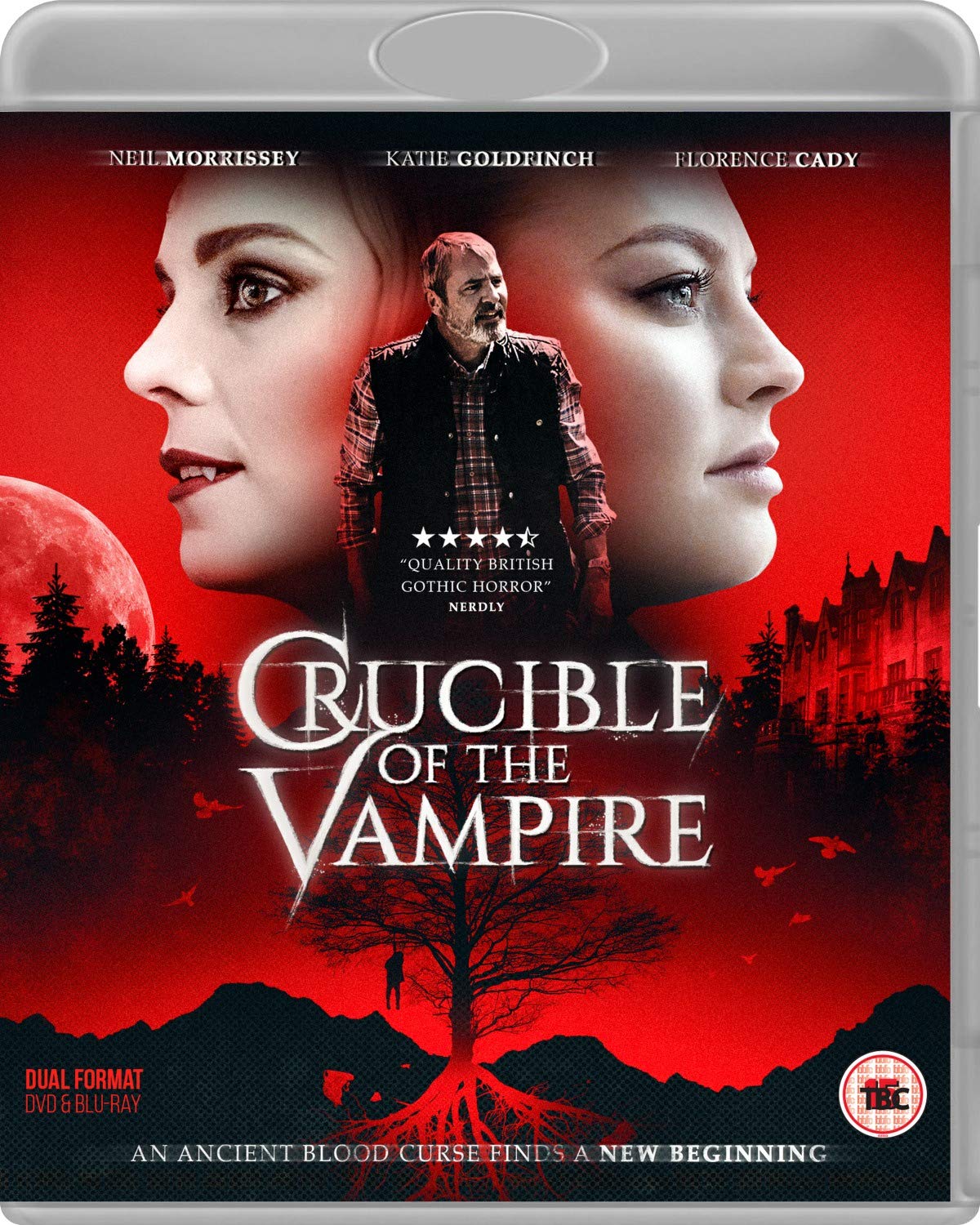 Crucible of the Vampire (2019)
Screenbound, certificate 15
Originally written for Dark Side magazine

The sad truth is, the British horror industry has sunk to such depths that almost any halfway competent entry is greeted with disproportionate excitement, and whilst Crucible of the Vampire is by no means as instantly forgetable as some recent releases, its overall impact is that of a damp squib rather than the fireworks we all hope to see again.

When archaeologist Isabelle (Katie Goldfinch) is dispatched to a remote country house to evaluate a potential addition to her museum’s collection, she soon runs foul of the item’s current owner, Karl (Larry Rew, Underworld: Rise of the Lycans). At least his wife Evelyn (Babette Barat, who seems to have stepped out of a Ken Russell romp) and daughter Scarlet (Florence Cady) seem friendlier, the latter far more than usual in polite company. Meanwhile, resident gardener Robert (Neil Morrissey, I Bought a Vampire Motorcycle) offers moral support amidst a few dark hints about the estate’s health and safety record.

Pretty soon, Isabelle (a virgin, we helpfully learn via an oddly intimate conversation with a barmaid) is having curious dreams and encountering the stately manse’s spectral squatter. Luckily for her, Scarlet is happy to offer solace in her own bed, as well as a rather restrained sapphic seduction and a somewhat over-enthusiastic hickey.

It doesn’t take a graduate of Karlsbad University to see where this is going: the local Satanists want to use Isabelle’s virgin blood (lesbian sex doesn’t count, apparently) to restore the vampire in Karl’s upstairs bathroom to full strength and, well, the rest of their scheme is left unstated because Isabelle is soon channelling her inner Lara Croft and inserting some overdue dynamism into the film’s closing act.

This is director Iain Ross-McNamee’s second feature (his first was 2015’s ghost story The Singing Bird Will Come), co-written with Darren Lake and John Wolskel (whose Vampire Motorcycle credit no doubt explains Morrissey’s fleeting and frankly superfluous participation), and displays logistical assurance which sadly is not matched by any noticable skill in creating either tension or atmosphere. Like the photography, much of the drama is disappointingly flat, encouraging one’s mind to wander off piste and query why Scarlet, a vamp in both senses of the term, wanders happily around her home’s more sunlit wings, yet her presumed ‘siress’ flares like a Roman candle as soon as she exits the front door.

The great problem when reviewing a film such as Crucible of the Vampire is that the intentions of cast and crew are never in doubt: they clearly wanted to make a memorable British chiller in the vampiric vein of Dracula AD 1972 (with a PG-friendly dash of Lust for a Vampire). Unfortunately, the script simply doesn’t deliver the goods, and everything from that point onwards is rendered anaemic as a result.