[This film will be released on Blu-ray and DVD by Fabulous Films on 14 August 2017.] 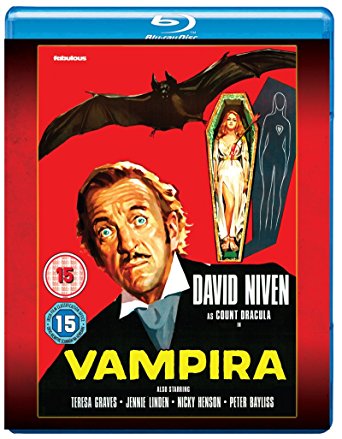 Reportedly squeezed out by sitcom sausage machine Jeremy Lloyd (Are You Being Served?; ‘Allo ‘Allo) as a favour for his friend David Niven (never better than in A Matter of Life and Death) when the latter revealed a yen to portray Count Dracula, Vampira is fatally undermined by the inability of Lloyd and director Clive Donner (1978’s small-screen rehash of The Thief of Baghdad; Get Smart revival The Nude Bomb) to decide what genre they’re aiming for. Spoof? Sophisticated comedy? Softcore farce? Woefully vague in both conception and delivery, this anaemic yarn offers a Dracula with little bite and jokes far too long in the tooth to raise more than a groan.

Niven tries to paste over the cracks with his career-winning bonhomie, but even he can’t save a scenario which sees his beloved wife transformed into a cross between Elizabeth Bathory and Foxy Brown following a ill-fated blood transfusion from a group of visiting Playboy models (don’t ask, it’s just one of numerous oddities in this screenplay). Lloyd was apparently instrumental in getting his former Rowan & Martin’s Laugh-In colleague Teresa Graves the title role, her only movie lead, but his storyline is less kind to Linda Hayden (dispatched with absurd haste), Jennie Linden (wasted as an imperilled literary agent) and Freddie Jones (whose demise shows every sign of having been heavily cut to avoid a higher certificate). Only Nicky Henson emerges relatively unscathed, playing a horror writer bent to the Count’s will (no sniggering at the back, though that would be a novelty with this film), but the material he’s working with feels like remnants from one of his mate Robin Askwith’s Confessions romps.

Hammering another nail into Vampira‘s coffin, this is by no means an optimal print, and the final scenes (in which Niven’s usual tan appears to have been coated in boot polish) are particularly washed out. Appropriate, really: playing up the ‘debonair aristocrat’ angle might have clicked with 1970s audiences (after all, aren’t most members of the nobility bloodsuckers of a kind?), but this vampire vehicle never really came into focus.